Lepisma saccharina, frequently called silverfish, fishmoths, carpet sharks or paramites, are small, wingless insects in the order Thysanura. Its common name derives from the animals silvery light grey and blue colour, combined with the fish-like appearance of its movements, while the scientific name indicates the silverfishs diet of carbohydrates such as sugar or starches. 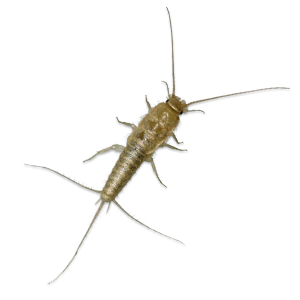 Silverfish are nocturnal, elongated and flattened insects typically 13â€œ25 millimetres (0.5â€œ-0.98 in) long. Their abdomen tapers at the end, giving them a fish-like appearance. The newly hatched are whitish, but develop a greyish hue and metallic shine as they get older. They have three long cerci at the tips of their abdomens, one parallel to their body, one facing left, and one facing right. They also have two small compound eyes, despite other members of Thysanura being completely eyeless, such as the family Nicoletiidae.
Like other species in Apterygota, silverfish completely lack wings. They have long antennae, and move in a wiggling motion that resembles the movement of a fish. This, coupled with their appearance, influences their common name. Silverfish typically live for two to eight years.
Silverfish Distribution

Silverfish are a cosmopolitan species, found throughout North America, Europe, Australia, Japan, Asia and other parts of the Pacific. They inhabit moist areas, requiring a relative humidity between 75% and 95%.[9] In urban areas, they can be found in basements, bathrooms, garages, closets and attics.
Silverfish Reproduction and Life Cycle

The reproduction of silverfish is preceded by a ritual involving three phases, which may last over half an hour. In the first phase, the male and female stand face to face, their trembling antennae touching, then repeatedly back off and return to this position. In the second phase the male runs away and the female chases him. In the third phase the male and female stand side by side and head-to-tail, with the male vibrating his tail against the female. Finally the male lays a spermatophore, a sperm capsule covered in gossamer, which the female takes into her body via her ovipositor to fertilise the eggs.
The female lays groups of less than three hundred eggs at once, deposited in small crevices. The eggs are oval-shaped, whitish, about 0.8 millimetres (0.031 in) long, and take between two weeks and two months to hatch. Silverfish usually lay fewer than one hundred eggs in their lifetime.
When the nymphs hatch, they are whitish in colour, and look like smaller adults. As they moult, young silverfish develop a greyish appearance and a metallic shine, eventually becoming adults after three months to three years.[11] They may go through seventeen to sixty-six moults in their lifetime, sometimes thirty in a single year, which is much more than usual for an insect. Silverfish are one of the rare species of insect that continue to moult after mating.
Silverfish Ecology

Silverfish consume matter that contains polysaccharides, such as starches and dextrin in adhesives. These include glue, book bindings, paper, photos, sugar, coffee, hair, carpet, clothing and dandruff. Silverfish can also cause damage to tapestries. Other substances that may be eaten include cotton, linen, silk, synthetic fibres and dead insects or even its own exuvia (moulted exoskeleton). During famine, a silverfish may even attack leatherware and synthetic fabrics. Silverfish can live for a year or more without eating.
Sliverfish Pests

Silverfish are considered a household pest, due to their consumption and destruction of property. Although they are responsible for the contamination of food and other types of damage, they do not transmit disease.
Earwigs, house centipedes and spiders are known to be predators of silverfish.
Silverfish Etymology
The scientific name for the species is Lepisma saccharina, due to its tendency to eat starchy foods high in carbohydrates and protein, such as dextrin. However, the insects more common name comes from the insects distinctive metallic appearance and fish-like shape. While the scientific name can be traced back to 1758, the common name has been in use since 1855.