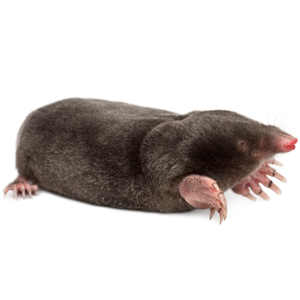 Moles are the majority of the members of the mammal family Talpidae in the order Soricomorpha. Although moles burrow, some species are semi-aquatic. Moles have cylindrical bodies covered in fur while the ears are generally not visible. They have small or covered eyes and can probably still tell night from day, although they are otherwise blind. Moles eat small invertebrates living underground. Moles can be found in most parts of North America, Asia, and Europe, although there are no moles in Ireland.
Mole Terminology

By the era of Early Modern English, the mole was also known in English as mouldy warp, a name echoed in other Germanic languages such as German, and Danish, Norwegian, Swedish and Icelandic (muldvarp, mullvad, moldvarpa where the muld/mull/mold part of the word means soil and the varp/vad/varpa part is a descendant of the old-Nordic word for throw), hence one who throws soil or dirt tosser.
Male moles are called boars, females are called sows. A group of moles is called a labour.
Mole Diet

A moles diet primarily consists of earthworms and other small invertebrates found in the soil and also a variety of nuts. Because their saliva contains a toxin that can paralyze earthworms, moles are able to store their still living prey for later consumption. Â�This is for the purposeâ€�researchers have discovered such larders with over a thousand earthworms in them. Before eating earthworms, moles pull them between their squeezed paws to force the collected earth and dirt out of the worms gut.

The Star-nosed Mole can detect, catch and eat food faster than the human eye can follow (under 300 milliseconds).

Although the mole can be eaten, the taste is said to be deeply unpleasant.
Mole Evolution

Darwin cites moles as an example of mammals that have organs that have become vestigial and are being phased out by natural selection:

The eyes of moles and of some burrowing rodents are rudimentary in size, and in some cases are quite covered by skin and fur. This state of the eyes is probably due to gradual reduction from disuse, but aided perhaps by natural selection. In South America, a burrowing rodent, the tuco-tuco, or Ctenomys, is even more subterranean in its habits than the mole; and I was assured by a Spaniard, who had often caught them, that they were frequently blind. One which I kept alive was certainly in this condition, the cause, as appeared on dissection, having been inflammation of the nictitating membrane. As frequent inflammation of the eyes must be injurious to any animal, and as eyes are certainly not necessary to animals having subterranean habits, a reduction in their size, with the adhesion of the eyelids and growth of fur over them, might in such case be an advantage; and if so, natural selection would aid the effects of disuse. (Charles Darwin, The Origin of Species, Laws of Variation)

Since the modern synthesis, Darwins suggestion that the moles eye became small probably due to gradual reduction from disuse is no longer fully accepted by modern biologists. The Lamarckian mechanism by which increased or decreased use of an organ could influence its reproduction, which was accepted by Darwin, has been replaced by an appreciation that natural selection and random genetic variation (genetic drift) are the primary drivers.
Mole Pest Status

Moles are considered to be agricultural pests in some countries, while in others, such as Germany, they are a protected species but may be killed if a permit is received. Problems cited as caused by lawn moles include contamination of silage with soil particles making it unpalatable to livestock, the covering of pasture with fresh soil reducing its size and yield, damage to agricultural machinery by the exposure of stones, damage to young plants through disturbance of the soil, weed invasion of pasture through exposure of fresh tilled soil, and damage to drainage systems and watercourses. Other species such as weasels and voles may use mole tunnels to gain access to enclosed areas or plant roots.

Moles burrow lawns, raising molehills, and killing the lawn, for which they are sometimes considered pests. They can undermine plant roots, indirectly causing damage or death. However, contrary to popular belief, moles do not eat plant roots.

They are controlled with traps such as mole-catchers, smoke bombs, and poisons such as calcium carbide and strychnine, which is now banned in Britain. The most common method now is Phostoxin or Talunex tablets. They contain aluminium phosphide and are inserted in the mole tunnels, where they turn into phosphine gas (not be confused with phosgene gas). More recently high grade nitrogen gas has proven an effective remedy, with the added advantage of having no polluting effect to the environment.

Other common defensive measures include cat litter and blood meal, to repel the mole, or flooding or smoking its burrow. There are also devices sold to trap the mole in its burrow, when one sees the Ã¢â‚¬Å“mole hillÃ¢â‚¬Â� moving and therefore knows where the animal is, and then stabbing it. Humane traps which capture the mole alive so that it may be transported elsewhere are also options.

However, in many gardens, the damage caused by moles to lawns is mostly visual, and it is also possible to simply remove the earth of the molehills as they appear, leaving their permanent galleries for the moles to continue their existence underground.

There is also the method of leaving a bottle sticking out of the hole, the wind blows across the top making a whistling noise which repels the mole due to the irritating sound.

Moles have very high quality fur. Moles pelts have a velvety texture not found in surface animals, whose pelts tend to be longer and react differently to being rubbed in different directions. To facilitate their burrowing lifestyle, mole pelts are short and very dense and have no particular direction in which friction moves more or less smoothly. The leather is extremely soft and supple. Queen Alexandra, the wife of Edward the Seventh, ordered a mole-fur garment in order to start a fashion that would create a demand for mole fur, thereby turning what had been a serious pest problem in Scotland into a lucrative industry for the country. Hundreds of pelts are cut into rectangles and sewn together to make a coat. The natural color is taupe, but it is readily dyed any color.

Many groups of burrowing animals (such as pink fairy armadillos, tuco-tucos, mole-rats; even mole crickets and mole crabs) have developed close physical similarities with moles due to convergent evolution. Two of these are so similar to true moles that they are commonly called and thought of as moles, although they are completely unrelated to true moles or to each other. These are the golden moles of southern Africa and the marsupial moles of Australia. While difficult to distinguish from each other, they are most easily distinguished from true moles by shovel-like patches on their noses which they use in tandem with their abbreviated forepaws to swim through sandy soils.