Ground beetles are a large, cosmopolitan family of beetles, Carabidae, with more than 40,000 species worldwide, approximately 2,000 of which are found in North America and 2,700 in Europe. 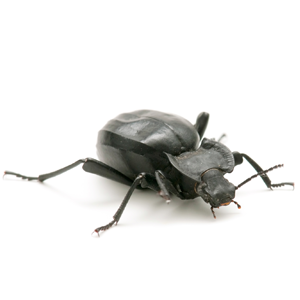 Ground Beetle Description & Ecology
Although there is some variation in their body shape and coloring, most ground beetles are shiny black or metallic and have ridged wing covers (elytra). The elytra are fused in some species, particularly large Carabinae, rendering the beetles unable to fly. The genus Mormolyce is known as violin beetles due to their peculiarly shaped elytra. All carabids except the quite primitive flanged bombardier beetles (Paussinae) have a groove on their foreleg tibiae bearing a comb of hairs. This is used for cleaning their antennae.