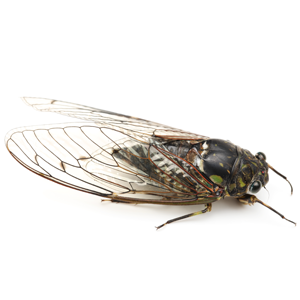 A cicadais an insect of the order Hemiptera, suborder Auchenorrhyncha, in the superfamily Cicadoidea, with large eyes wide apart on the head and usually transparent, well-veined wings. There are about 2,500 species of cicada around the world, and many remain unclassified. Cicadas live in temperate to tropical climates where they are among the most widely recognized of all insects, mainly due to their large size and remarkable acoustic talents. Cicadas are often colloquially called locusts, although they are unrelated to true locusts, which are a kind of grasshopper. They are also known as jar flies and, regionally, as July flies in the Southeastern United States, and as heat bugs in Canada and the Midwest. Cicadas are related to leafhoppers and spittlebugs. In parts of the southern Appalachian Mountains in the United States, they are known as dry flies because of the dry shell that they leave behind.

Cicada Threat
Cicadas are benign to humans in normal circumstances and do not bite or sting in a true sense, but may in fact sting after mistaking a person arm or other part of their body as a tree or plant limb and attempt to feed. Cicadas have a long proboscis under their head that they use for feeding on tree sap, and if they attempt to inject it into a persons body it can be painful, but is in no other way harmful. This sting is not a defensive reaction and should not be mistaken for aggression; it is extremely uncommon, and usually only happens when they are allowed to rest on a persons body for an extended amount of time. Cicadas can cause damage to several cultivated crops, shrubs, and trees, mainly in the form of scarring left on tree branches while the females lay their eggs deep in branches.

Cicada Taxonomy
Cicadas are arranged into two families: Tettigarctidae (q.v.) and Cicadidae. There are two extant species of Tettigarctidae, one in southern Australia, and the other in Tasmania. The family Cicadidae is subdivided into the subfamilies Tettigadinae, Tibiceninae, Cicadinae, and Cicadettinae, and they exist on all continents except Antarctica.

The largest cicadas are in the genera Pomponia and Tacua. There are some 200 species in 38 genera in Australia, about 450 in Africa, about 100 in the Palaearctic, and exactly one species in England, the New Forest cicada, Melampsalta montana, widely distributed throughout Europe. There are about 150 species in South Africa.

Most of the North American species are in the genus Tibicen: the annual or dog-day cicadas (so named because they emerge in late July and August ). The best-known North American genus is Magicicada, however. These periodical cicadas have an extremely long life cycle of 13 to 17 years and emerge in large numbers.[1] Another American species is the Apache cicada, Diceroprocta apache.

Australian cicadas differ from many other types because of that continents diversity of climate and terrain. In Australia, cicadas are found on tropical islands and cold coastal beaches around Tasmania; in tropical wetlands; high and low deserts; alpine areas of New South Wales and Victoria; large cities like Sydney, Melbourne, and Brisbane; and Tasmanian highlands and snowfields.

Forty-two species from five genera populate New Zealand, and all are endemic to New Zealand and the surrounding islands (Norfolk Island, New Caledonia). Many New Zealand cicada species differ from those of other countries by being found high up on mountain tops.

Cicada Description
The adult insect, sometimes called an imago, is usually 2 to 5 cm (1 to 2 in) long, although some tropical species can reach 15 cm (6 in), e.g. Pomponia imperatoria from Malaysia. Cicadas have prominent eyes set wide apart on the sides of the head, short antennae protruding between or in front of the eyes, and membranous front wings. Also, commonly overlooked, cicadas have three small eyes, or ocelli, located on the top of the head between the two large eyes that match the colour of the large eyes.

Desert cicadas are also among the few insects known to cool themselves by sweating, while many other cicadas can voluntarily raise their body temperatures as much as 22Â°C (40Â°F) above ambient temperature.[10]

Male cicadas have loud noisemakers called Ã¢€Å“tymbalsÃ¢€Â� on the sides of the abdominal base. Their singingÂ� is not the stridulation (where one structure is rubbed against another) of many other familiar sound-producing insects like crickets: the tymbals are regions of the exoskeleton that are modified to form a complex membrane with thin, membranous portions and thickened ribsÂ�. Contracting the internal tymbal muscles produces a clicking sound as the tymbals buckle inwards. As these muscles relax, the tymbals return to their original position producing another click. The interior of the male abdomen is substantially hollow to amplify the resonance of the sound. A cicada rapidly vibrates these membranes, and enlarged chambers derived from the tracheae make its body serve as a resonance chamber, greatly amplifying the sound. They modulate their noise by positioning their abdomens toward or away from the substrate. Additionally, each species has its own distinctive song.

Cicada Habitat
Average temperature of the natural habitat for this species is approximately 29Â°C (84Â°F). During sound production the temperature of the tymbal muscles were found to be slightly higher. Cicadas like heat and do their most spirited singing during the hotter hours of a summer day.

Although only males produce the cicadas distinctive sound, both sexes have tympana, which are membranous structures used to detect sounds and thus the cicadas equivalent of ears. Males can disable their own tympana while calling.

Some cicadas produce sounds up to 120 dB (SPL)[12] at close range, among the loudest of all insect-produced sounds. This is especially notable as their song is technically loud enough to cause permanent hearing loss in humans, should the cicada sing just outside the listeners ear (unlikely). Conversely, some small species have songs so high in pitch that the noise is inaudible to humans. Species have different mating songs to ensure they attract the appropriate mate. It can be difficult to determine which direction(s) cicada song is coming from, because the low pitch carries well and because it may, in fact, be coming from many directions at once, as cicadas in various trees all make noise at once.

In addition to the mating song, many species also have a distinct distress call, usually a somewhat broken and erratic sound emitted when an individual is seized. A number of species also have a courtship song, which is often a quieter call and is produced after a female has been drawn by the calling song.

Cicada Life Cycle
After mating, the female cuts slits into the bark of a twig, and into these she deposits her eggs. She may do so repeatedly, until she has laid several hundred eggs. When the eggs hatch, the newborn nymphs drop to the ground, where they burrow. Most cicadas go through a life cycle that lasts from two to five years. Some species have much longer life cycles, such as the North American genus, Magicicada, which has a number of distinct broods that go through either a 17-year or, in the South of the USA, a 13-year life cycle. These long life cycles perhaps developed as a response to predators such as the cicada killer wasp and praying mantis. A predator with a shorter life cycle of at least 2 years could not reliably prey upon the cicadas.

Cicadas live underground as nymphs for most of their lives, at depths ranging from about 30 cm (1 ft) down to 2.5 m (about 8Â½ ft). The nymphs feed on root juice and have strong front legs for digging.

In the final nymphal instar, they construct an exit tunnel to the surface and emerge. They then molt (shed their skins), on a nearby plant for the last time and emerge as adults. The abandoned skins remain, still clinging to the bark of trees.

Cicada Predation
Cicadas are commonly eaten by birds, but Massospora cicadina (a fungal disease) is the biggest enemy of cicadas. Another known predator is the cicada killer wasp.

In eastern Australia, the native freshwater fish Australian bass are keen predators of cicadas that crash-land on the surface of streams.

Some species of cicada also have an unusual defense mechanism to protect themselves from predation, known as predator satiation: by many emerging at once, whereas there are no cidadas around for much of the year, essentially, the number of cicadas in any given area exceeds the amount predators can eat; all available predators are thus satiated, and the remaining cicadas can breed in peace.

Around 220 cicada species have been identified in Australia, many of which go by fanciful common names such as: cherry nose, brown baker, red eye (Psaltoda moerens), green grocer/green Monday, yellow Monday, whisky drinker, Double drummer (Thopha saccata), and black prince. The Australian green grocer, Cyclochila australasiae, is among the loudest insects in the world.

Being principally tropical insects, most Australian species are found in the northern states. However, cicadas occur in almost every part of Australia: the hot wet tropical north; Tasmanian snowfields; Victorian beaches and sand dunes such as Torquay and deserts. According to Max Moulds of the Australian Museum in Sydney: the green grocer is unusual in its ability to adapt perfectly to the urbanized environment.Cicada sounds are a defining quality of Melbourne, Sydney, and Canberra during late spring and the summer months.

Australian green grocer cicada
Cicadas inhabit both native and exotic plants including tall trees, coastal mangroves, suburban lawns, and desert shrubbery. The great variety of flora and climatic variation found in north-eastern Queensland results in its being the richest region for the spread of different species. The area of greatest species diversity is a 100 km (60 mi) wide region around Cairns. In some areas they are preyed on by the cicada-hunter (Exeirus lateritius) which stings and stuns cicadas high in the trees, making them drop to the ground where the cicada-hunter mounts and rides them, pushing with its hind-legs, sometimes over a distance of a hundred meters, till they can be shoved down into its burrow, where the numb cicada is placed onto one of many shelves in a catacomb, to form the food-stock for the wasp grub that grows out of the egg deposited there.

Cicadas in Culinary Use
Many people around the world regularly eat cicadas; the female is prized, as it is meatier. Cicadas have been (or are still) eaten in Ancient Greece, China, Malaysia, Burma, Latin America, and the Congo. Shells of cicadas are employed in the traditional medicines of China.

Cicadas have been eaten in China, Malaysia, Burma, Latin America, Germany, the Congo and in the United States. In North China, cicadas are skewered, deep fried or stir fried as a delicacy.