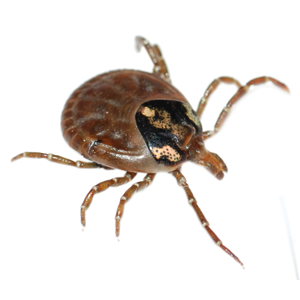 Tick is the common name for the small arachnids in superfamily Ixodoidea that, along with other mites, constitute the Acarina. Ticks are ectoparasites (external parasites), living by hematophagy on the blood of mammals, birds, and occasionally reptiles and amphibians. Ticks are vectors of a number of diseases, including Lyme disease, Q fever (rare; more commonly transmitted by infected excreta), Colorado tick fever, tularemia, tick-borne relapsing fever, babesiosis, ehrlichiosis and tick-borne meningoencephalitis, as well as anaplasmosis in cattle and canine jaundice.
Tick Habitats and Behaviors

Ticks are blood-feeding parasites that are often found in tall grass where they will wait to attach to a passing host. A tick will attach itself to its host by inserting its chelicerae (cutting mandibles) and hypostome (feeding tube) into the skin. The hypostome is covered with recurved teeth and serves as an anchor.
Seed ticks (tick larvae) also attack horses, cattle, moose, lions and other mammals, causing anemia, various diseases, paralysis and even death. Such infestations can be difficult to detect until thousands have attached themselves to an animal and eradication can be difficult.
Frequent grooming and chemical applications may control the spread of ticks.
Changes in temperature and day length are some of the factors signalling a tick to seek a host. Ticks can detect heat emitted or carbon dioxide respired from a nearby host. They will generally drop off the animal when full, but this may take several days. In some cases ticks will live for some time on the blood of an animal. Ticks are more active outdoors in warm weather, but can attack a host at any time.
Ticks can be found in most wooded or forested regions throughout the world. They are especially common in areas where there are deer trails or human tracks. Ticks are especially abundant near water, where warm-blooded animals come to drink, and in meadows wherever shrubs and brush provide woody surfaces and cover.
Case study of the American deer tick

The black legged or deer tick (Ixodes scapularis) is dependent on the white-tailed deer for reproduction. Larval and nymph stages (immature ticks that cannot reproduce) of the deer tick feed on birds and small mammals. The adult female tick needs a large 3 day blood meal from the deer before she can reproduce and lay her 2000 or more eggs. Deer are the primary host for the adult deer tick and are key to the reproductive success of the tick.
Numerous studies have shown that abundance and distribution of deer ticks are correlated with deer densities.
When the deer population was reduced by 74% at a 248-acre (100 ha) study site in Bridgeport, Connecticut, for example, the number of nymphal ticks collected at the site decreased by 92%. The relationship between deer abundance, tick abundance, and human cases of Lyme disease was well documented in the Mumford Cove Community in Groton, Connecticut, from 1996 to 2004. The deer population in Mumford Cove was reduced from about 77 deer per square mile to about 10 deer per square mile (4 deer per square kilometer) after 2 years of controlled hunting. After the initial reduction the deer population was maintained at low levels. Reducing deer densities to 10 deer per square mile (4 deer per square kilometer) was adequate to reduce by more than 90% the risk of humans contracting Lyme disease in Mumford Cove.
A 2006 study by Penn StateÃ¢â‚¬â„¢s Center for Infectious Disease Dynamics indicated that reducing the deer population in small areas may lead to higher tick densities, resulting in more tick-borne infections in rodents leading to a high prevalence of tick-borne encephalitis and creating a tick hot-spot.
Tick Control Methods

The parasitic Ichneumon wasp Ixodiphagus hookeri has long been investigated for its potential to control tick populations. It lays its eggs into ticks; the hatching wasps kill their host.
Another natural form of control for ticks is the guinea fowl, a bird species which consumes mass quantities of ticks. Just 2 birds can clear 2 acres (8,100 m2) in a single year.
Topical (drops/dust) flea/tick medicines may be toxic to animals and humans. Phenothrin (85.7%) in combination with Methoprene was a popular topical flea/tick therapy for felines. Phenothrin kills adult fleas and ticks. Methoprene is an insect growth regulator that interrupts the insects life cycle by killing the eggs. However, the U.S. Environmental Protection Agency required at least one manufacturer of these products to withdraw some products and include strong cautionary statements on others, warning of adverse reactions.
Tick ClassificationThere are three families of ticks, one of which Nuttalliellidae comprises a single species, Nuttalliella namaqua. The remaining two families contain the hard ticks (Ixodidae) and the soft ticks (Argasidae).
* Dermacentor variabilis, the American dog tick, is perhaps the most well-known of the North American hard ticks. This tick does not carry Lyme disease but can carry Rocky Mountain spotted fever.
Ixodes
* Ixodes scapularis (formerly Ixodes dammini), known as the black-legged tick or deer tick, is common to the eastern part of North America and is known for spreading Lyme disease.* Ixodes pacificus, the Western black-legged tick, lives in the western part of North America and is responsible for spreading Lyme disease and Rocky Mountain spotted fever. It tends to prefer livestock such as cows as its adult host.* The most medically important tick is the paralysis tick, Ixodes holocyclus. It is found in a 20-kilometre band that follows the eastern coastline of Australia. Encounters with these parasites are relatively common as this is where much of the human population resides in New South Wales and South-East Queensland. Although most cases of tick bite are uneventful, some can result in life threatening illnesses including paralysis, tick typhus, and severe allergic reactions both in humans and pets.
Rhipicephalus
* The southern cattle tick, Rhipicephalus microplus, causes annual economic losses in the hundreds of millions of dollars to cattle producers throughout the world, and ranks as the most economically important tick globally. This tick also attacks sheep, horses, goats, and a few related species, but cattle are the most important hosts.
Amblyomma
* The Lone Star tick, Amblyomma americanum, is part of the Ixodidae family. The adult females are distinguished by a white dot or “lone star" on its back. The adult males can also be seen with dots and white streaks on the edge of their bodies. This tick has been associated with transmission of Southern Tick Associated Rash Illness (STARI) in humans. The etiologic agent causing STARI is unknown, but a spirochete, Borrelia lonestari, was detected in the skin of one patient and the lone star tick that bit him. However, subsequent study of over two dozen STARI patients has found no evidence of B. lonestari infection.
Argasidae
Members of this family include Argas and Ornithodoros.
Fossil record
Fossil ticks are common. Recent hypotheses based on total-evidence approach analysis place the origin of ticks in the Cretaceous (65 to 146 million years ago) with most of the evolution and dispersal occurring during the Tertiary (5 to 65 million years ago). The oldest example is an argasid (bird) tick from Cretaceous New Jersey amber. The younger Baltic and Dominican ambers have also yielded examples, all of which can be placed in living genera.