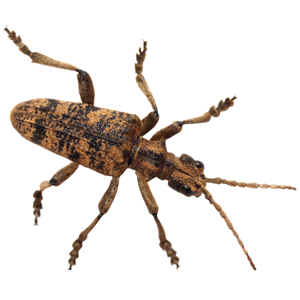 The old-house borer (Hylotrupes bajulus) is a species of wood-boring beetlein the family Cerambycidae (longhorn beetles). Contrary to its name, it is more often found in new houses; this is in part because new home construction may use wood infected with the beetles eggs. Originating in Europe, the old-house borer now has a worldwide distribution, including the Mediterranean, South Africa, Asia, USA and Canada. Recently it has been found in Perth, Australia. In Australia, it is known as the European House Borer.
Old-house borers prefer seasoned softwoods, and particularly pine. Only the larvae feed on the wood. Larvae take two or three or more years to mature, depending on the moisture content of the wood. Larvae usually mature in the spring, and the mature adults then cut holes 6-10 mm  in diameter to exit the wood. Adults are most active in the summer. They are black or brown with grayish hair on their upper bodies and wing cases. They have shiny spots that resemble eyes.