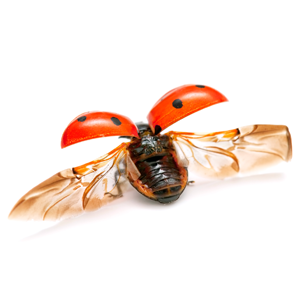 Scientific classification
Kingdom: Animalia
Phylum: Arthropoda
Class: Insecta
Order: Coleoptera
Superfamily: Cucujoidea
Family: Coccinellidae
Coccinellidae is a family of beetles, known variously as ladybirds (UK, Ireland, Australia, Pakistan, South Africa, New Zealand, India, Malta, some parts of Canada and the US), or ladybugs (North America). Scientists increasingly prefer the names ladybird beetles or lady beetles as these insects are neither birds nor true bugs. Lesser-used names include ladyclock, lady cow, and lady fly.
Coccinellids are small insects, ranging from 1 mm to 10 mm (0.04 to 0.4 inches), and are commonly yellow, orange, or scarlet with small black spots on their wing covers, with black legs, head and antennae. A very large number of coccinellid species are mostly, or entirely, black, grey, or brown and may be difficult for non-entomologists to recognize as coccinellids. Conversely, there are many small beetles that are easily mistaken for coccinellids, such as the tortoise beetles.
Coccinellids are found worldwide, with over 5,000 species described, more than 450 native to North America alone.
A few species of ladybug are considered pests in North America and Europe, but they are generally considered useful insects as many species feed on aphids or scale insects, which are pests in gardens, agricultural fields, orchards, and similar places. Harmonia axyridis (or the Harlequin ladybug) was introduced into North America from Asia in 1988 to control aphids but is now the most common species as it is out-competing many of the native species. It has since spread to much of western Europe, reaching the UK in 2004.
A common myth is that the number of spots on the insects back indicates its age.
The nameladybird originated in Britain where the insects became known as Our Ladys birdÂ� or the Lady beetleÂ�. Mary (Our Lady) was often depicted wearing a red cloak in early paintings and the spots of the seven spot ladybird (the most common in Europe) were said to symbolise her seven joys and seven sorrows. Common names in other European languages have the same association (the German name Marienkfer translates to Marybeetleor, literally, Mary-chafer).[10] In the United States the name was adapted to Å“ladybug.
Coccinellids are typically predators of Hemiptera such as aphids and scale insects, though conspecific larvae and eggs can also be important resources when alternative prey are scarce. Members of the subfamily Epilachninae are herbivores, and can be very destructive agricultural pests (e.g., the Mexican bean beetle). While predatory species are often used as biological control agents, introduced species of ladybirds (such as Harmonia axyridis or Coccinella septempunctata in North America) outcompete and displace native coccinellids and become pests in their own right.
Coccinellids are often brightly colored to ward away potential predators. This phenomenon is called aposematism and works because predators learn by experience to associate certain prey phenotypes with a bad taste (or worse). Mechanical stimulation (such as by predator attack) causes Å“reflex bleedingÂ� in both larval and adult ladybird beetles, in which an alkaloid toxin is exuded through the joints of the exoskeleton, deterring feeding. Ladybugs, as well as other Coccinellids are known to spray a toxin that is venomous to certain mammals and other insects when threatened.
Most coccinellids overwinter as adults, aggregating on the south sides of large objects such as trees or houses during the winter months, dispersing in response to increasing day length in the spring. In Harmonia axyridis, eggs hatch in 3-4 days from clutches numbering from a few to several dozen. Depending on resource availability, the larvae pass through four instars over 10-14 days, after which pupation occurs. After a teneral period of several days, the adults become reproductively active and are able to reproduce again, although they may become reproductively quiescent if eclosing late in the season. Total life span is 1-2 years on average.
It is thought that certain species of Coccinellids lay extra infertile eggs with the fertile eggs. These appear to provide a backup food source for the larvae when they hatch. The ratio of infertile to fertile eggs increases with scarcity of food at the time of egg laying.
Ladybug Habitats

Most Coccinellids are beneficial to gardeners in general, as they feed on aphids, scale insects, mealybugs, and mites throughout the winter. As in many insects, ladybugs in temperate regions enter diapause during the winter, so they often are among the first insects to appear in the spring. Some species (e.g., Hippodamia convergens) gather into groups and move to higher land, such as a mountain, to enter diapause. Predatory ladybugs are usually found on plants where aphids or scale insects are, and they lay their eggs near their prey, to increase the likelihood the larvae will find the prey easily. Ladybugs are cosmopolitan in distribution, as are their prey.
Ladybugs also require a source of pollen for food and are attracted to specific types of plants. The most popular ones are any type of mustard plant, as well as other early blooming nectar and pollen sources, like buckwheat, coriander, red or crimson clover, and legumes like vetches, and also early aphid sources, such as bronze fennel, dill, coriander, caraway, angelica, tansy, yarrow, of the wild carrot family, Apiaceae. Other plants that also attract ladybugs include coreopsis, cosmos (especially the white ones), dandelions and scented geraniums.
Ladybugs are sensitive to most synthetic insecticides. If food sources are limited, oviposition is reduced. A larva uses its sharp jaws to crush an aphids body and sucks out the aphids juices.
In the United States, ladybugs usually begin to appear indoors in the fall. They leave their summer feeding sites in fields, forests and yards looking for a place to spend the winter. Typically when temperatures warm to the mid-60s Fahrenheit in the late afternoon, following a period of cooler weather, they will swarm onto or into buildings illuminated by the sun. Swarms of ladybugs fly to buildings in September through November depending on location and weather conditions. Also, homes or buildings near fields or woods are more prone to ladybug infestation.
The presence of ladybugs in grape harvests can cause ladybird taint in wines produced from the grapes.
Ladybug Human Impact

After an abnormally long period of hot dry weather in the Summer of 1976 in the UK, there was a marked increase in the aphid population followed by a Ã¢â‚¬Å“plagueÃ¢â‚¬Â� of ladybirds, with many reports of people being bitten as the supply of aphids dwindled. Recent studies suggest that coccinelidae can also cause allergic reactions, such as eye irritation or asthma.